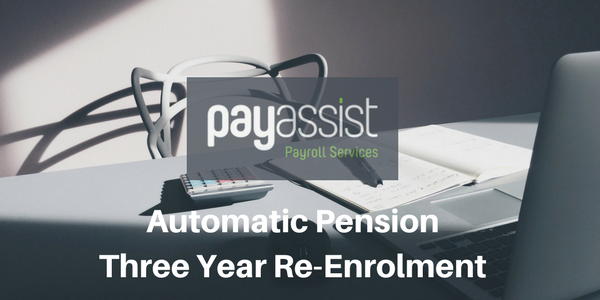 We are now at the stage where the majority of qualifying businesses in the United Kingdom have had their staging dates for the auto-enrolment workplace pension scheme.

Companies that are still to have their staging dates are those that are counted as ‘new employers’ – those that have formed in the past two years, and weren’t operating when the scheme started.

The timeline for staging has worked its way from the biggest UK companies, when the scheme launched in 2012, to the smallest, with the last group (bar the ‘new employers’) entering in March 2017.

We’ve previously written on what businesses have to do to start the automatic enrolment process.

Another big administrative task then comes approximately three years after their staging date – the re-enrolment of employees.

This is a legal obligation. Be aware that if your business doesn’t both re-enrol and submit a re-declaration of compliance, you are liable to receive a fine from the Pensions Regulator.

Choosing a date for re-enrolment

The process for re-enrolment is largely the same as the initial enrolment process.

To start with, you’ll need to select a re- date. This should take place between three months before and three months after that the three-year anniversary of your staging date (the ‘re-enrolment window’).

This gives you enough leeway to ensure you can avoid busy periods, such as busy periods, holidays such as Christmas, or when you’re expecting an influx of new workers (or avoid a round of redundancies).

You cannot, however, use postponement at the re-enrolment date.

However – bear in mind that whatever date you choose, that then becomes the marker for the next round of re-enrolment (after approximately six years).

Who do you need to reassess?

When you’ve chosen a date, make sure you’ve got all worker data entirely up-to-date.

While re-enrolment is likely to be a big job, unless you’ve had a wholesale staff change in the last three years it shouldn’t be as long of a process as the initial enrolment.

This is because you don’t have to assess every single worker, but only those who fall into one of the following categories:

That means that people in the scheme and making proper contributions, workers under 21 or over the state pension age, or those don’t earn enough to qualify, don’t need to be re-assessed.

This also means that if all your staff are in the workplace pension scheme, between 21 and the state pension age, and paying at least the minimum contribution, you don’t need to re-assess anyone! Instead you can simply complete your re-declaration and make a note for the next re-assessment in three years’ time.

Now you have figured out which staff members need re-assessing, you now need to ascertain if they qualify to be put back into the company pension scheme.

Firstly, staff that meet the following criteria have to be put back into the scheme:

Following those that definitely have to be re-enrolled are those that you, as an employer, can choose to re-enrol:

Within six weeks after their re-enrolment date, employers will need to write to each member of staff that has been re-enrolled to inform them they’ve been re-entered into your workplace pension scheme. This is a legal obligation.

You do not, however, have to write to staff that aren’t being put back into the scheme.

When you’ve done all of the above, you need to inform the Pensions Regulator that your company is still fully compliant.

This must be done even if you haven’t had to put any staff back into the scheme at all.

To complete the re-declaration of compliance, visit the Pensions Regulator website.

Are you in the right pension scheme for your business?

One part of the initial pension auto-enrolment was choosing a pensions scheme provider.

As this was a new venture, the main priority for many companies was that they simply chose a compliant provider, rather than shopping around and looking for the right scheme.

Now, with employers having the time to reflect on their previous choices and with pension scheme providers having a few years of experience under their belt, quality service is becoming a factor that is likely to compete more and more with compliance (and cost) through each cycle.

It might be tempting to get the re-enrolment over and done with as quickly as possible, but don’t miss out on this opportunity to reflect on whether you’re in the right pension scheme in the first place.

Too much to take in?

If you’re a business owner who is concerned about the re-enrolment process and think you might need assistance, then PayAssist is here to help!

We provide bespoke outsourced payroll services to many businesses in the UK of various sizes – including the automatic workplace pension scheme.

We can work with your scheme, inform you about the available government schemes, or refer you to one of our partner companies who can recommend the right one for your business.