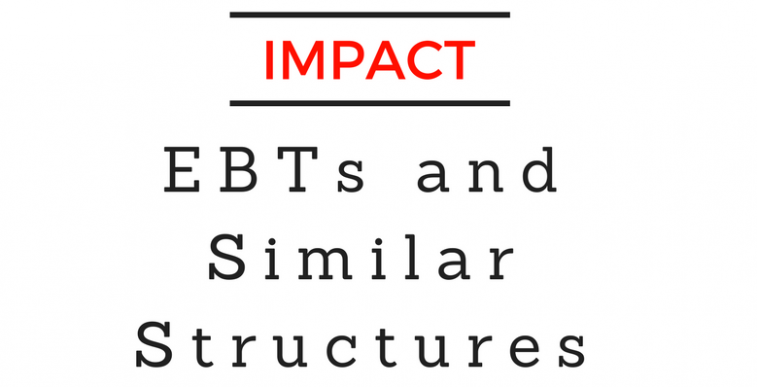 Murray Group Holdings: The impact on EBTs, similar structures and other recent developments

Murray Group Holdings: the impact on EBTs and similar structures as well as other recent developments

On 5th July 2017, the Supreme Court handed down its judgement in the Rangers EBT “Big Tax Case”. This was streamed live on the Courts website.

The live summing up took all of ten minutes! It brought to a final conclusion almost seven years of litigation concerning the taxation of loans made to footballers/ senior employees during the years 2001-2010.

Previously the Court of Session in 2015 had upheld the appeal made by HMRC and determined that income which is derived from an employee’s work qua as an employee, is earnings assessable to income tax. This applies even if the employee requests or agrees that it be redirected to a third party (the “redirection principle”).

In regards to the Supreme Court case, it was decided that the central issue was whether it is necessary that the employee himself or herself should receive, or at least be entitled to receive, the remuneration for his or her work in order for that reward to amount to taxable emoluments.

Having examined the relevant legislation Lord Hodge concluded at a paragraph 39 of the judgement that “ I see nothing in the wider purpose of the legislation, which taxes remuneration from employment , which excludes from tax charge  or the PAYE regime remuneration which the employee is entitled to have paid to a third party”.

In arriving at this conclusion it was decided that there were three important principles of statutory interpretation that needed to be considered.

Turning to the machinery of the PAYE regulations, once it has been established that there is a link to employment and work done, it is necessary to determine whether there is in fact a “payment” from which payroll deductions are required to be made. Lord Hodge summed up at paragraph 54 of the judgement that there is “… no basis for establishing a general rule or “principle” that a payment is made for the purposes of PAYE only if the money is paid to or at least placed unreservedly at the disposal of the employee”.

In essence the Supreme Court judgement would seem to imply that an employee can be taxed even if he doesn’t physically receive the earnings or in circumstances where he has no control over any amounts redirected  to a third party.  On a literal reading of the judgement, all that would seem to need to be established is that the amount so paid derives from his work as an employee.

There would however seem be a need to have a direct link between both in order to trigger a liability to tax. Otherwise a Company could set up a general bonus pool and pay this out to a third party without concern as there would be no tax trigger because of a lack of a direct link to a specific employee.

Practical implications of the Judgement and dealing with unresolved cases

The case only has a bearing on transactions up to 2010. From 9th December 2010 onwards, the “disguised remuneration” rules now apply as set out in Part 7A ITEPA. This legislation which has been extended in the recent 2015 Finance Act, seeks to tax payments to third parties (so wider than EBT trustees) at the earliest opportunity.

It is likely that as regards open enquiries into EBTs up to 2010, HMRC will seek to issue Follower Notices in circumstances where on the facts there is a perceived link between the payment and work done. This will have the practical effect that HMRC can then issue closure notices to bring enquiries to a conclusion and then seek to enforce any additional tax that has become due.

If such Notices are issued, the taxpayer has no direct right of appeal although representations can be made on very specific grounds. Failure to take corrective action can lead to a tax geared penalty of up to 50%.

Due to the length of some of these enquiries , it is likely that companies are going to be facing significant liabilities in relation to accrued interest which could well increase the overall amounts by some 30- 50%. If it can be established that HMRC is partially to blame for delays then the Company may have grounds to make a claim for interest mitigation as regards part of the liability.

Although the various EBT Settlement Opportunities effectively had an expiry date of 31st March 2017, it is likely that in the short term, HMRC may well still be amenable to reaching a general settlement. Whilst the incentives and benefits offered to encourage companies to settle has gradually eroded in recent years, there well could still be some advantages here.

Now also may be a good time to try and resolve other non-earnings type enquiries with HMRC. There is still a backlog of cases dating back to post 1999 where the issue is Dextra and the disallowance of corporation tax deductions for contributions. However in subsequent periods it is possible that outright payments have been to employees. In these circumstances it could well be just an issue of timing. The specific circumstances will need to be worked through but it could well be that the real cost is simply late payment interest.

Interaction with Part 7A planning

Matters become more complicated where individuals have effectively repaid their EBT loans by undertaking further planning. The recent Finance Act changes to Part 7A are clearly aimed at thwarting such arrangements.

In respect of pre-2017 transactions it will be necessary to establish the tax point for an earnings charge. Is this when the loan was made or the time the repayment occurred (via further planning)?  Technically in fact there could be two tax charges leading to double taxation! On 20th March 2017, HMRC published “Tackling disguised remuneration: draft guidance for changes to Part 7A”. We have here nearly 17 pages of guidance dedicated to attempting to deal with double taxation situations!

To date HMRC seem to have taken a slightly different stance as regards EFRBS arrangements. We have seen HMRC issue APNs over the last 12 to 18 months on the basis that the asserted tax advantage is not in relation to earnings, but the upfront corporation tax relief claimed on the contribution to the pension.  A number of arrangements were previously marketed on the basis of attempting to avoid what was previously Sch24 FA 2002 restrictions on corporation tax relief. These supposedly worked by (artificially) relying on specific exemptions that were carved out in the legislation.

This approach by HMRC may have been guided by the Supreme Court ruling in Forde & Mc Hugh Ltd v Revenue & Customs Comrs. 2014. This case concerned the set up and funding of an old style FURBS, and here the issue was NIC and not PAYE/ earnings. The decision effectively established the principle that in order to avoid double taxation, it is the receipt of benefits that triggers a tax point for NIC and not at the point when contributions are made to the pension fund.

For those companies that still have unresolved enquiries and where protective assessments not been vacated, it will be interesting to see whether HMRC now seek to issue Follower Notices in accordance with Murray Group Holdings.

It is certainly likely that there will be cases where HMRC will be able to determine on the facts that the EFRBS arrangement has been run very similar to situations where there has effectively been a redirection of earnings.

The concern therefore would be situations where there is a direct link between contributions and subsequent substantial loans to individuals within very close proximity. EFRBS are supposed to provide Relevant Benefits post- employment and pensioner trustees therefore should have different responsibilities to EBT trustees.

HMRC may well therefore raise questions in circumstances where say 80% plus of the fund has been more or less immediately lent out on beneficial terms to members of the scheme. We will need to wait and see!

To date HMRC have generally accepted that no IHT liabilities arise at the point when the EBT/ EFRBS receives initials contributions from the company. However what may well be in point are potential 10 yearly charges if the Trust falls within the Relevant Property regime as well as potential exit charges.

It has previously been possible to reach settlement with HMRC which also incorporates these IHT liabilities. From a practical perspective this then generally allows loan to be formally written off and the Trust subsequently to be terminated. This however has been a stumbling block to concluding matters in some cases, as the additional liabilities could well be an additional effective rate of tax of between 5-10% of value of the assets in the Trust.

It is very likely that HMRC (subject to its resource constraints) will widen the scope of their focus on EBTs to now also start pursuing these liabilities.  Unlike in relation to payroll and corporation taxes, there is in fact no time limit in which HMRC are able to open enquiries or raise assessments.

As regards who ultimately suffers these liabilities, generally the trustees have the obligation here in the first instance. However where the trustees are offshore and amounts remain unpaid, it is possible for HMRC to collect the tax either from the Settlor Company and/or beneficiaries in appropriate circumstances.

It may well be possible that there will be companies and individuals that still remain relatively unscathed from these tax issues for the next couple of years. However any employees or former employees with loans still outstanding at 6th April 2019 that date back over the last 20 years beware!

Although dropped from the recent Finance Bill due to the recent surprise election, the 2019 changes will be reintroduced. Ministers in fact confirmed on the 13th July that the Finance Bill will be introduced as soon as possible after the summer recess.

The government has also reaffirmed that all policies originally announced to start from April 2017 will be effective from that date.

So this will mean any loan outstanding on 6th April 2019 will at that point trigger a Part 7A tax charge. Shortly thereafter HMRC can then issue protective assessments for any under declared PAYE and NIC.

Although we have limited detail at this stage, it is also proposed that in a subsequent Finance Act, HMRC will also have the powers to collect any unpaid liabilities in relation to this new tax charge directly from the loan recipient.

Technically this is already possible under existing PAYE regulations, however presently there are safeguards in place as the burden of proof is upon HMRC to in effect establish there has been wilful neglect. In many situations this can be rebutted on the basis of professional advice taken by the company and or directors at the time. However going forward this is unlikely to be such a defence due to recent changes in the tax code since 9th December 2010.

For any questions, please contact Anthony Rose on anthony.rose@sgllp.co.uk

What is the Job Support Scheme?